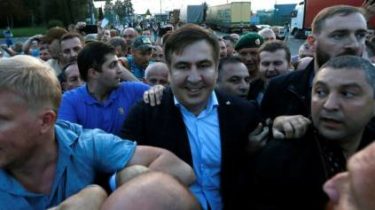 To Mikheil Saakashvili and his associates, who illegally crossed the day before, on September 10, the state border with Poland, arrive at the checkpoint “Shegini” and complete the registration procedure.

This was announced by the Minister of internal Affairs of Ukraine Arsen Avakov.

He also suggested a way to legitimize the border crossing the arrival of one of the divisions of the Migration service.

Currently, upon the organization of breaking the boundaries of the national police opened a criminal case under article 332 “Illegal transportation of persons through the state border of Ukraine”. “The investigation and the formal procedure of gathering facts and evidence. This is a “heavy” article. I’m sure the Prosecutor will support us. As the courts. Every character who was involved in breaking the border and attacking border guards and police will be physically installed and will be punished by Law,” – said the Minister.

Avakov noted that all participants in the violation of the procedure of crossing the border of Ukraine, among which are MPs, to report to the police to testify. Border patrol, police and Migration authorities are conducting the necessary legal proceedings.

In General, according to the Minister of internal Affairs, illegally crossed the border of 40 people, among whom were foreigners.

At the same time, Arsen Avakov drew a parallel between the capture of Pro-Russian militants checkpoint “Izvarino” in 2014: “I am sorry for this analogy, sorry, but deja vu was too obvious. Only the flags, not Russian.”

We will remind, on Sunday, September 10, former head of the Odessa regional state administration and the former President of Georgia Mikheil Saakashvili, which has deprived the Ukrainian citizenship, entered the territory of Ukraine through KP “shehyni” in Lviv region.