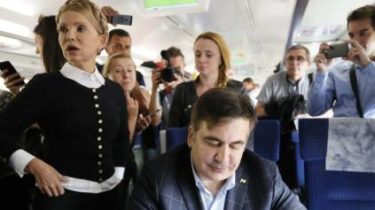 This was stated during an impromptu rally at the checkpoint “shehyni”.

“Civilians from the Ukrainian side, peacefully went to the Ukrainian border, and absolutely peacefully took the delegation where they were MPs and Saakashvili, and they’ve peacefully moved on the territory of Ukraine on foot,” – said at the rally.

Saakashvili is now surrounded by supporters and MPs are sent on foot in the direction of Ukraine.

Supporters of Saakashvili and the fight broke to the checkpoint “shehyni”