The people’s representatives, which broke through border with Saakashvili will be punished – Gerashchenko 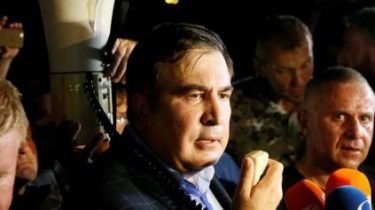 The Deputy speaker of the Verkhovna Rada Iryna Gerashchenko has condemned MPs who accompanied deprived of Ukrainian citizenship, Mikheil Saakashvili, on the Polish-Ukrainian border.

“Why won’t they come to mind to support Mikheil when he and his government are in fact really needed, when Georgia was bleeding, why they didn’t go concerted series on the Georgian-Russian border and then stood before the Russian tanks, and then, in September 2008, and gave the go-ahead your faction not to vote for our resolution of VR on the recognition of the Russian aggression against Georgia was a Russian aggression? Why are all these activists who were then in the age of reason and was positioned activists silent?” – wrote Gerashchenko on his page in Facebook.

She suggested that the support of deputies Saakashvili was an attempt to humiliate the guards.

The Deputy speaker of Parliament also noted that the MPs will be held accountable: “Breakthrough of the Ukrainian border, crossing her border without inspection is a crime”.

Videoprogram borders: how to Mikheil Saakashvili managed to return to Ukraine

We will remind, on Sunday, September 10, former head of the Odessa regional state administration and the former President of Georgia Mikheil Saakashvili, which has deprived the Ukrainian citizenship, entered the territory of Ukraine through KP “shehyni” in Lviv region. His supporters broke through a cordon of Ukrainian law enforcers. They took in a dense ring policy, and legislators and public figures who accompanied him, and literally “made” them on the territory of Ukraine.

The adviser to the interior Minister Anton Gerashchenko has published a list of MPswho helped Saakashvili to cross the border. Among them, in particular, was Yulia Tymoshenko, Serhiy Vlasenko, Yuriy Derevyanko, Pavel Kostenko, Dmytro Dobrodomov and former head of the SBU Valentin Nalyvaychenko.