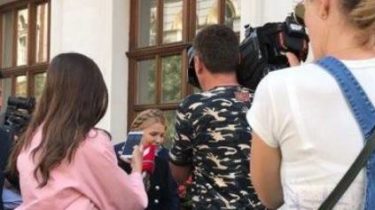 Near the hotel, where after yesterday’s break through the border stopped the ex-President of Georgia Mikheil Saakashvili, of the police or supporters of ex-head of the Odessa regional state administration, according to TSN.12.00.

Only a large number of the press. In a few minutes at the hotel to begin the meeting of Saakashvili with Ukrainian politicians. Journalists became witnesses of how the hotel came to Yulia Tymoshenko, Serhiy Vlasenko, semen Semenchenko – all those who accompanied Saakashvili the road to Ukraine.

What will be discussed at this meeting is still unknown. Politicians say that it will be about the fate of the country.

And while politicians at the meeting, the wife and son of Saakashvili have Breakfast in a street cafe.

All night tonight, according to TSN, at the checkpoint “shehyni” worked investigative team and representatives of the military Prosecutor’s office. According to the testimony of border guards as well as video and photographic images, the investigators found all who illegally crossed the border into Ukraine. It is about fifty people, Saakashvili, MPs and activists.

We will remind that the Minister of internal Affairs gave two options for Saakashvili and his associates to return to the border and officially pass the crossing procedure. Or contact the immigration service. And here the lawyer Saakashvili told TSN that the policy has applied to the State migration service to receive the status of the person in need of complementary protection.