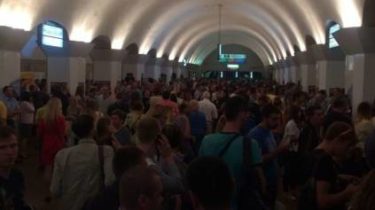 Metropolitan police at the metro station “Kontraktova square” announced that the train traffic due to smoke will be restricted to two hours, at least.

This was reported by the officer on the scene, writes UNIAN.

Recall that the blue line of the Kiev metro fire transaction closed by the movement between the “Petrovka” and “Taras Shevchenko”. Trains between these stations is stopped for an indefinite period. Now trains run from the metro station “Obolon” to “Heroes of Dnepr” and “Kontraktova square” to “Towers”.

In turn, the official page of the Kiev metro on Facebook, spread the message of the following content: Blue line. The movement of the “Heroes of Dnepr – Maidan Nezalezhnosti” and “Petrovka” – “towers”. On the stretch “Kontraktova square” – “Taras Shevchenko” was discovered smoke.