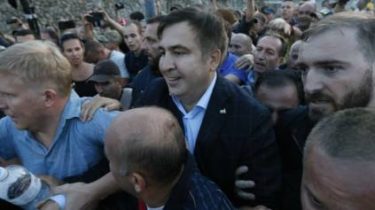 Mikheil Saakashvili, who is accused of illegally crossing the border, still not detained for the reason that now under investigations.

This explanation was predostavil Director of the communications Department of the MIA of Ukraine Artem Shevchenko, reports BBC Ukraine.

“Now there are all the necessary investigative actions in accordance with the norms of the Criminal procedure code by agreement with the prosecution required of judicial decisions”, – he said.

According to Shevchenko, investigations relate not only to Saakashvili, but all persons involved in the breakthrough of the border on Sunday evening.

We will remind, on Sunday, September 10, former head of the Odessa regional state administration and the former President of Georgia Mikheil Saakashvili, which has deprived the Ukrainian citizenship, entered the territory of Ukraine through KP “shehyni” in Lviv region. His supporters broke through a cordon of Ukrainian law enforcers. They took in a dense ring policy, and legislators and public figures who accompanied him, and literally “made” them on the territory of Ukraine.