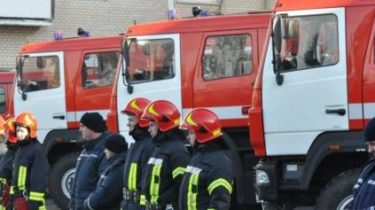 More than a month part of the capital hem is a pedestrian area, but the fencing blocks the area with the arrival of autumn and the recovery of traffic in the city is almost inaccessible to emergency services vehicles. Reporters witnessed the departure of fire for, according to legend, a fire in the street Sagaydachnogo, where there are many cafes and shops, according to a story TSN.19:30.

Plan to arrive the brigade of workers of gschs should be 10 minutes. However, from August 1, Sagaidachnogo street and part of Kontraktova square became a pedestrian area, but cars that are parked there, now stand in the neighbouring narrow streets. Using this for the last few dozen meters to the location of the simulated call for fire into ZIL in a very complicated and lengthy stage of the trip.

Rescuers meet with concrete barriers and columns between which you need to drive without hitting nearby parked cars. These same machines do not allow fire vehicles to move the blocks and to pass on the desired area. On the street Borisoglebskaya added to this is the repair of roads and drivers who did not want to give the car the SSES. Finally go to Kontraktova square-Sahaidachny and succeeded, but it took 30 minutes – three times more than you need. “Not to touch any car – you have to be assom. I did not ACE”, – wipes sweat from his forehead with a driver who is tired from the stress.

In the Podolsk district administration noted that according to the rules of entrances to each building should be few, and this rule is observed. “There are entrances from each street, each street municipal vehicles can enter the territory. All a blocks fire car easily budge,” – says the first Deputy head of the district Nikolai Dubovik. Experiment with a pedestrian zone in the RGA until satisfied, and next year promises to replace Belardi and continue walking the plot to the Postal square. No risks in that officials do not see and added that the order of Parking is to keep the police.