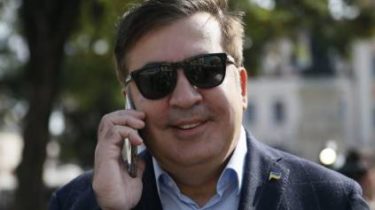 Deprived of Ukrainian citizenship by the former head of the Odessa regional state administration and the former President of Georgia Mikheil Saakashvili said it plans to take in Ukrainian regions.

He said this while interacting with the media.

“I’m going to ride in all regions of Ukraine, to unite with individual people, with different political forces around a common theme that we have in the country should be a democracy and should not be the dictates of the oligarchs. We can unite the parties, may not unite. I think it is not important now. I am very happy that around my threads merged completely different forces that have not previously sat down together. Hrytsenko, Tymoshenko, “Samopomich”, Dobrodomov, Nalyvaychenko, Chumak, “Demalyansa”. Very different people came together and said that such lawlessness will not pass. There are themes that unite us. For me it is very nice. I am pleased that around this theme was a coincidence of opinions different people. Ukrainians at the crucial moment can come together,” he said.

We will remind, deprived of citizenship, Saakashvili in late July, when he was outside Ukraine. He is a politician promised to return September 10. He entered the territory of Ukraine through KP “shehyni”that in Lviv region, although I was going to make it through KP “” that in the Lviv region. The border, he got the bus.

The state border service of Ukraine announced a breakthrough in the checkpoint “shehyni”, which Mhel Saakashvili went to the territory of Ukraine, mass illegal trespassing.