In Kiev “wet” the vandals painted in a bright green color not only the fountains, and the river Lybid 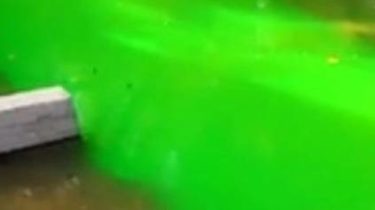 Yesterday, on September 12, the water in the fountains in the centre of capital – on the Independence square and the hem – was the bright green color. Clean fountains public utilities had the whole day – at first drained the water, washed the fountains, and then start them again.

This is stated in the plot of TSN.Sores.

Almost simultaneously turned green and the water in the river Lybid. In social networks there was video.

This is not the first case to output the same fate befell the fountains on Independence square. What was painted over the water, the utility did not say. And do not rule out that the capital’s fountains can turn off before the end of September, if the bullies will not rest.