Saakashvili’s appeal against deprivation of nationality in court – lawyer 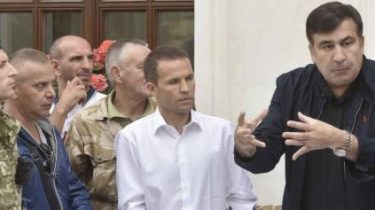 The former head of the Odessa regional state administration, Mikheil Saakashvili will appeal against the deprivation of citizenship of Ukraine in the Supreme administrative court.

This was stated by the politician’s lawyer Markian halabala has been.

“We expect a judicial review of the administrative Protocol, to continue to defend its position. One of our next steps will be to appeal the presidential decree on depriving Saakashvili of the citizenship of Ukraine in the Supreme administrative court,” – said the lawyer “UKRINFORM”.

Saakashvili signed the Protocol, but with their applications

On the eve of President of Ukraine Petro Poroshenko said that during the six month Saakashvili used the opportunity to challenge in court the revocation of citizenship. Illegal border crossing politician Garant called the crime.

We will remind, deprived of citizenship , Saakashvili in late July, when he was outside Ukraine. He is a politician promised to return September 10. He entered the territory of Ukraine through KP “shehyni” that in Lviv region, although I was going to make it through KP “Krakovets”. To the border he got a bus and crossed it illegally, together with 60 persons. Some of them have used force against the guards.

VideoCAM Saakashvili and activists broke through the border of Ukraine