Scandal in the monastery: sanctuary run by two “Director” 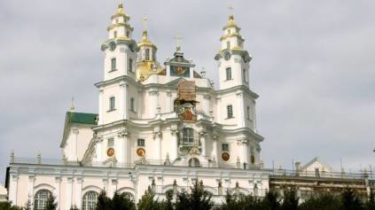 The contest General Director of “National Kyiv-Pechersk Storico-cultural reserve” will announce a new selection, since the previous one broke. This was stated by the Ministry culutre, says the story TSN.19:30.

Now the reserve has two leaders. Alexander shepherd – the first Deputy Director of his order of appointment, signed by his former head of the UGCC Michailidou. Alexander Rudnik – acting, appointed by the relevant Ministry. The Ministry of culture explain such a paradox is the fact that the head of the reserve were to be elected by competition, because the contract with the old ended at the beginning of September, choose the small special Commission of 9 members – representatives of labour collective, public organizations and ministries. But when the time came, the Commission did not have quorum.

Because the competition was not held, officials have appointed an interim Director, because I believe it’s part of the act the Central government. The chosen Ministry is not associated with the culture and is now taking care of the Museum – supervise employees to fulfill the plans that they have previously approved. Appointment of the successor Mihaileni due to the common practice for the position of head of the his Deputy until a new full head. Now in this conflict is to understand the court.

In Vyshgorod reserve on the appointment of the Director Vlada Litovchenko: this thunder from a clear sky

The competition Commission in the disruption of the contest accused the culture Ministry, because three of its representatives did not attend the selection. For the members of the Commission have appealed to the Prosecutor General. Officials have to Commission their claims, most of which bias – if they are lobbying for the appointment Mihaileni. The situation was commented even by the Prime Minister Groysman urged to conduct a transparent and objective competition. The Ministry of culture clarifies that the competition should be resumed when the outcome of all litigation and verification.