Two of the wounded in the ATO area: the military record of the aggravation of the situation in the East 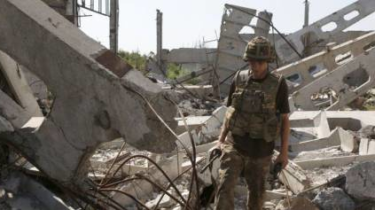 For last days terrorists of 27 times broke the truce in the Donbass. Two Ukrainian defenders was injured.

“At the end of the last days the situation in the ATO area worsened,” – said the military.

The most turbulent in the direction of Donetsk. The militants were shot near the Town of Kamenka, beat on the Ukrainian fortifications near the Sands.

#Topod the Construction of the press center of staff ATO in 12.09.2017. At the end of the last days the situation in the ATO area …

Posted by the Press center of the ATO headquarters on Tuesday, September 12, 2017

In the seaside area used a gun near Shyrokyne and Water.

On the Lugansk direction the only hot accurate was the settlement of the Crimean.

Earlier, the UN published data on the victims of the war in the Donbass. From 14 April 2014 until 15 August 2017 documented 34 766 victims in the Donbass, among them military, civilian and members of armed groups.