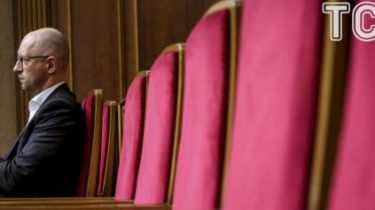 The investigative Committee of the Russian Federation persistently sculpts Thriller from the ex-Prime Minister of Ukraine Arseniy Yatsenyuk. According to Russian investigators, Yatseniuk has many years of experience of fighting with the Russian army: first, in Transnistria, then in Chechnya.

Russian security forces have discovered photos of members of UNA-UNSO in 1992 during the war in Transnistria and in the most blurred image I saw Arseniy Yatsenyuk. The photo shows the man wearing glasses, the face of which it is simply impossible to discern, but the Russian “expertise” photo set in this Yatsenyuk.

This photo was added by the Russians to “the Chechen business” the former Prime Minister and based on this photo essentukskogo the court ruled in absentia arrest of Yatsenyuk.

Transnistria – is a new episode in the “military career,” the former head of the Ukrainian government, which he is building of the Russian investigative authorities.

In September 2015, exactly two years ago – the head of the Investigative Committee of Russia Alexander Bastrykin said that Arseniy Yatsenyuk in the middle of 1990-ies fought against the Armed forces of the Russian Federation in Chechnya.

According to Bastrykin, Yatsenyuk fought in the punitive group “Argo”, and then “Viking”, which was led by a well-known nationalist Alexander Muzychko, or “Sasha White”, who died during detention in Rivne in March 2014.

Russian investigators believe that Yatsenyuk took part in at least two armed clashes that took place in Grozny on 31 December 1994 the square Minute, and in February 1995 in the area of city hospital No. 9. Note that the battle for area Minute was one of the most fierce and bloody, during the first Chechen war. In the course of the center of the city was virtually razed to the ground.

Also, according to the investigation, Yatseniuk participated in the torture and executions of captured soldiers of the Russian army in Grozny’s Oktyabrsky district on 7 January 1995.

According to Bastrykin, Yatsenyuk was awarded the highest honor of Dzhokhar Dudayev “honor of the nation” for the “destruction of Russian soldiers”.

Response Yatsenyuk to the accusations from the Russian side

In the official biography of Arseniy Yatsenyuk stated that in 1991 he graduated from the school. In 1994-1995, when Chechnya was the first war, Yatsenyuk worked in his native city of Chernivtsi President of the law firm and studied at Chernivtsi national University named after Yuriy Fedkovych.

In Russia, invented new charges in the case of the “Chechen atrocities” Yatsenyuk

When Russia’s Investigative Committee issued a “sensational news” about participation of the opposition in the fighting in Chechnya, at the time acting Prime Minister of Ukraine said: “This is a clinical diagnosis of the Russian government: Stalinist justice, mixed with Goebbels propaganda and confirmed were signed by Vladimir Putin”.

Direct participants in the events in Chechnya in 1994-1995 deny the participation of Yatsenyuk in the fighting.

One of the former leaders of the Chechen insurgents Ahmed Zakaev, in an interview bi-Bi-si said that no doubt that Yatsenyuk was not involved in the Chechen war.

“I remember, for example, Bilyh Sasha (Oleksandr Muzychko, aka Sashko Bilyi), and others we even imagined at the time to the state award after the end of the war, basically, it was a small group of Ukrainians [ …] and we all knew each other, so I have no doubt that he wasn’t there, of course not,” Zakayev said.

Later, the head of the Chechen Republic Ramzan Kadyrov also said that Yatsenyuk has not fought in Chechnya.

A bullet in the forehead. American trucker sang the new hit of the “Chechen terrorist” Yatsenyuk

“I don’t believe that Yatsenyuk is the warrior that he is able to fight, I don’t consider him a man. This is a real nerd. If he is a warrior and fought, I don’t know,” said Kadyrov, who during the First Chechen war fought on the side of Chechen separatists. He added that he didn’t see Yatsenyuk in Chechnya in 1994-1995.

When Russia’s Investigative Committee announced their charges against Yatsenyuk, social media users almost burst with laughter. Ukrainians were new faces, ironic and humorous posts, kouba, and even jokes on the subject.

But it would be funny if it were not so sad. Two Ukrainian Stanislav Klyh and Mykola Karpyuk – are serving sentences in Russian prisons for these trumped up charges.

What we missed in the interview about “Chechen terrorists” Yatsenyuk

In September 2015, the year when the Trail of the Russian Federation filed charges Yatsenyuk, journalist Valentina Samar wrote that the Federal security service of the Russian Federation “broke” two of the political prisoners and they gave false testimony about the “brutality” of the opposition in Chechnya. In her words, “witness,” began Stanislav Klyh and Mykola Karpyuk.

Russian security forces seized Cliche and Karpyuk in 2014 and as well as Yatsenyuk, accused of participation in combat actions against Russian troops in Chechnya. The Ukrainians denied his guilt and said that was never in Chechnya, was captured by Russian security forces illegal, and the testimony and confessions were obtained by the Russian investigation under torture.

In the end, a Russian court sentenced Nikolai Karpyuk to 22,5 years, Stanislaus Cliche – to 20 years of imprisonment. The Supreme court upheld the sentences in force.