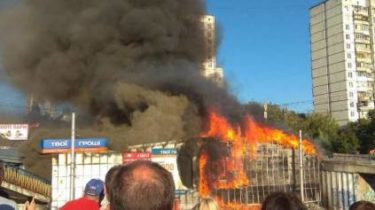 In Kiev, the fire engulfed the market “Kolibris” on Borshchagovka.

Broke pharmacy under transportation on Prospekt Lesya Kurbasa. The fire area of about 2000 square meters. The fire has suspended the movement of high-speed trams №3. No casualties were reported. The place offers 14 units and 63 firefighters.

Rescuers still consider all versions of the fire: short-circuit, arson and careless handling with fire.

The fire managed to localize, but all the fire rescuers promised in a few hours.

We will remind, in the capital on the street Simirenko, 24, in a residential area South of Kyiv in the Svyatoshinsky district, on the eighth floor of a 9-etazhki massive fire occurred. Killed 5-year-old boy. It happened on Sunday, September 10, at noon.