Near Kiev burned the fuel braces 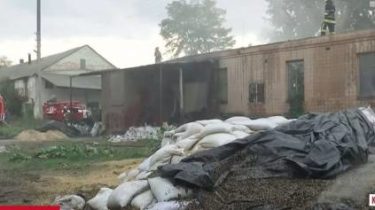 A large fire at the production of heating materials scared people in Berezan Kiev region. The fighting came even brigade neighbouring Baryshevka, says the story TSN.19:30.

The fire broke out in the former food combine, which is no longer working. But there is a fuel braces, the roof of which caught fire. The danger was that the fire could spread to the products – then the fire would have acquired tremendous scope. However, rescuers worked skillfully, and for the hour and 12 minute localized fire. Affected by the disaster there.

“Probably happened from the fire of the boiler. They dried bracketing the chimney is heated and the roof caught fire. Roof dry – wood, roofing material. Very quickly broke out, engulfed the entire roof area,” – said the commander of the rescue unit Sergey geets. According to him, the elimination of fire worked two pieces of equipment from Baryshevka, and ancillary equipment of public utilities.

This is not the first large-scale fire in Berezan this year. In may, they broke out almost a kilometer cloth factory. The fire was covered by warehouses, the fire lasted more than four hours. From one of the warehouses there were only disfigured by fire, metal, and products – bathrobes, linen, blankets burned up. Another room is damaged, the remaining 8 warehouses were saved.