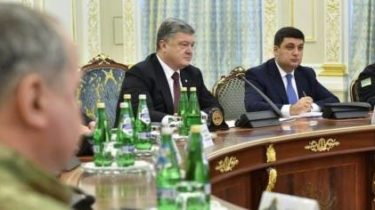 At the meeting of the Council of national security and defence had accepted the concept of providing counter-intelligence and development of the system of government in situations of emergency and special period.

This was announced by the NSDC Secretary Oleksandr Turchynov, says the site Council.

“At the meeting of the NSDC of Ukraine was considered and adopted the Concept of providing counter-intelligence regime in Ukraine and the Concept of reforming and further development of the system of government in situations of emergency and special period”, – stated in the message.

Turchinov said that given the safe situation, the priorities of the “National intelligence program for 2016-2020, strengthening counter-intelligence protection, the fight against terrorism and subversive activities”. Among the priorities – implementation of the state policy in the field of cybersecurity, implementation of measures on development and modernization of special communication and information protection.

We will remind that earlier the President of Ukraine Petro Poroshenko during the NSDC meeting, said: “We are able to keep the Russian aggressor, who has the most powerful army on the continent, that number is five times larger than ours, and the military budget which in some years exceeded 16 in our time.”