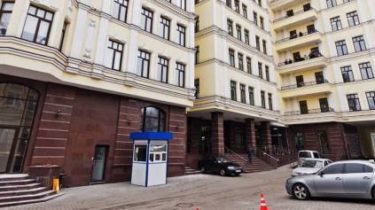 The Prosecutor’s office began the process of assessment and construction expertise office “1+1 media”. Forensic expert of the Kiev scientific research Institute of the Prosecutor of the GPU on Friday an hour and a half inspected the building on Kiev Podil, according to a story TSN.19:30.

“They provided the decision of Pechersky regional court of Kiev. It all started with the roof, went through all the floors and all the premises, even went to the toilet. We understand that the aim of the experts was to ensure that the building is, it is not rebuilt” – said the representative of LLC “Hem-real estate” Sergey Wild. Guests took pictures of the Studio, offices and even the Parking lot, then walked off. “Of course, we asked what will be the actions from the Prosecutor General, but we did not explain anything”, – said the representative of the firm that owns the building.

Videoproto stop broadcast: the beginning of the GPU process are estimated-building expertise of the office of the “1+1 Media”

How TSN became known from informed sources, the attack on the “1+1” is such a Sergey Ovcharenko, Deputy head of management on investigation of especially important cases of the Prosecutor’s office. For confidential information, he was threatened with dismissal, so in order to stay, he chose a controversial, but a high-profile case surrounding the channel. This Prosecutor is so mysterious that his photo is nowhere to be found – neither on the website of the GPU, or in social networks. Declares he, along with his wife, also an employee of the Prosecutor General’s office, an apartment in the capital of nearly 100 squares, slightly less housing in Lviv and old cars. And earned over the past year half a million hryvnia.

The hem of capital structure “1+1” moved in 2012. The office of the media leased from a private company, the money for the rent paid for the next few years, but now faces the danger of eviction. It happened because of the events of 2014 – while the national Bank has allocated a loan to PrivatBank in the amount of 4.5 billion hryvnia in the same amount was granted to the collateral of many guarantors, among which there is the building of “1+1”. And after three years the main financial body of the country requires only one owner of this office, the firm “Hem-real-estate” to return the full amount of the debt, while the cost of the building is only 250 million UAH. “Our company was one of several guarantors on the loan – and made us look guilty: or debtors for the entire amount of the loan, or, in the alternative, the national Bank will take away our building,” – said the representative of the company Oleg Linnik.