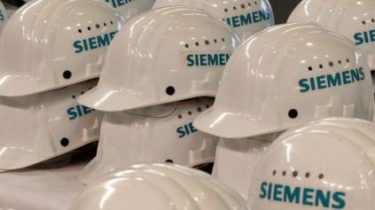 German company Siemens has refused to supply equipment for modernization of the gas transportation system of Ukraine not to lose Russian market.

This was during the annual conference “Yalta European strategy” (YES) said the Chairman of the Board NAK “Naftogaz of Ukraine” Andrey KOBOLEV, transfers UNIAN.

Siemens have a few chances. The “Kommersant” was told about the scheme of deliveries of the turbines in the Crimea

“The first compressors are already brought in, it was the Siemens compressor portfolio. But after a while we got a call from Siemens and said that if they bring another car, their supplies to Russia will be reduced to zero”, – he said.

Recall that in early July, Reuters reported that Russia imported turbine to power the German company Siemens in the occupied Crimea, despite European sanctions. The German company stated that it did not have conclusive evidence of the possible delivery of the turbines in the Crimea.

On 11 July it became known that Siemens has filed a lawsuit against the company “Technopromexport” for the supply of turbines in the Crimea.

After that, the Russian media reported that in St.-Petersburg employees of FSB have detained the General Director of company “Power machines” of the Novel, which, according to preliminary data, suspected of divulging state secrets. At his workplace and home were searched, then Director of “Power machines” was questioned and released under recognizance not to leave.

According to the investigation, Roman Filippov “informed outsiders of documents containing confidential information”.

The company “Power machines” together with the German company created the “Siemens Gas Turbine Technology”, which was developed gas turbine SGT5-2000E. Later the turbines were delivered to the occupied Crimea company “Tekhnopromexport”, although the sanctions prohibit Siemens to do this.

On 4 August, the European Union decided to extend sanctions list against Russia because of the scandal of Siemens supplying turbines to the occupied Crimea. In the “black list” were Deputy Minister of energy of the Russian Federation Andrey Cherezov, head of the Department of energy of the Russian Federation Evgeny Grabchak and the General Director of Technopromexport, Sergey TopoR-Warmer. Restrictive measures will affect three Russian companies – JSC and JSC “VO Tekhnopromexport” and the company “Interavtomatika”, which was a joint venture of Siemens and Russia.