They go to the West. In Belarus will start large-scale military exercises with the Russians 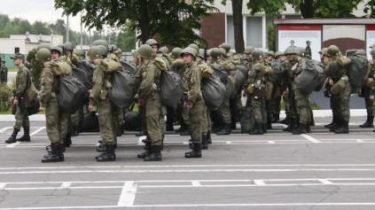 In Belarus begin joint military exercises “West-2017”. They will take place on the territory of this country and the Kaliningrad region of Russia near the border of Ukraine and the Eastern borders of NATO. According to the official data will be used 13 thousand soldiers and 250 tanks.

In social networks Belarusians for several weeks post videos like Russian equipment delivered to the training sites. It is known that 17 September will be managed by the aircraft of the two armies, 18 – play battle to retain boundaries, and 19 – will train air defence units.

The national security Council of Ukraine claim that the real number of participants – up to a quarter million troops. NATO is concerned about the activity of Russian and Belarusian troops and believe that the exercises are aimed at provoking the member countries of the Alliance.

The security service of Ukraine urges inhabitants of border in Chernihiv region to be vigilant during the exercises “West-2017”.

Rehearsal for war in Europe. What may turn out military exercises of Russia to Belarus

In addition to Ukraine, the real threat of war, these doctrines are considered in Lithuania and Poland. This is stated in the story “Sedanka z 1+1”.

On a legend of doctrines, the Western part of Belarus was named Vacherie: this aggressive “country” is going to capture the territory of Belarus. “Extremists” of this state have a powerful military support from the outside, so the Russians go to the aid of the Union state

According to the international requirements in such large-scale exercises, no observers may attend no more than 13 thousand military. If international supervision is required. Meanwhile, the Council stated that under the pretext of exercise “Zapad-2017” the Russians have accumulated near the Ukrainian border thousands of the Armada.

According to the Russian exercises “West 2017” will be attended by 250 tanks and 70 airplanes and helicopters. Experts suggest that involved in the exercises, the Russian military can stay on the territory of Belarus.

At the same time, they are calm, that Ukraine, as the NATO countries have nothing to fear. In parallel with the “West – 2017” started in Ukraine and other military exercises with the involvement of the Alliance.

Images 14 countries in Ukraine: the military of Canada and the United States told how to fight at NATO standards

Exercises “West-2017” will be held from 14 to 20 September. And exercise Rapid trident-2017 will last for four days – from 12 to 22 September. The defense Ministry of Ukraine told that in them will take part more than 2,5 thousand troops from Ukraine and 14 countries-partners.