In Kiev looking for ideas for the new Park under the St. Andrew’s descent 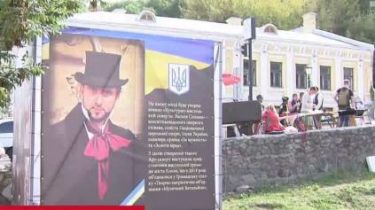 Social activists looking for architects and landscape designers to create a memory square Opera singer and a volunteer Basil Slipka. Now in Kiev at the hem near St. Andrew’s descent, laid the first stone of the future of the Park, says the story TSN.19:30.

It happened under the Opera singing and applause. What would such a place have yet to be defined at competition of projects and build a want to start in the spring. Regarding ideas, gardens thoughts were not the same. “I think he would like, his name is exactly. He was always very modest in this respect. He wished that it was a group memory of all people who gave their lives for our country,” – said the brother, Orest Slipak. “It will be a free stage – and song and poetry show themselves, to join the Ukrainian culture. And this memory seems to be worthy of Basil Slipka,” said the co – organizer of the event Valery Subbotin.

In Lviv was opened a memorial plaque in honor of the Opera singer Slipka, who died in ATO

The soloist of the Paris Opera Vasily Slipak threw a quiet life and a successful career and went to war as a volunteer. He died June 29, 2016 under the Donetsk from the bullet of an enemy sniper. President Petro Poroshenko was posthumously awarded Slipko the title of Hero of Ukraine. The star and the documents , the head of state gave parents an outstanding Ukrainian.