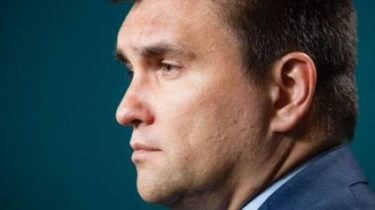 The Minister of foreign Affairs of Ukraine Pavlo Klimkin said that in the process of preparing to place peacekeepers in the Donbass , the UN security Council should not endorse a single resolution.

He said this to journalists at a briefing, writes UNIAN. The Minister reminded that Ukraine for the first time prepared a resolution on peacekeepers “before 2015”.

“We made our position all the friends and partners. But Russia expected that it will be able to move the discussion about its draft resolution not only on experts but also on the political level. This by definition will not, because all these Russian tricks will not work”, – said Klimkin.

He also added that will be discussed in the UN security Council is a “technical resolution”.

“We gave our vision. We have, of course, its draft resolution but, again, it is important to understand that what we will discuss in the security Council, the first resolution, she in the jargon of the diplomats called a technical,” – said the Minister.

He said that this “technical” resolution is necessary to determine the final goal, which is necessary to achieve the result of deployment of peacekeepers in the Donbas. “It will be a boost to the General Secretary (Antonio Gutteres – Ed.) and, by the way, I will be meeting with the Secretary General in new York to send a mission, so to speak, to place red flags that should result from such a mission,” – said Klimkin.

He also said that clear rules on the timing of the deployment of peacekeeping missions there.

“There are no formal rules in the UN no. We know that this process usually takes between six months and more, and it depends on the political context of the mandate from the participants, that is to say only that it will be conditionally for six and a half months, or seven and a half months, we can not” – said Klimkin.

We will remind, the President of the Russian Federation Vladimir Putin has declared, that supports introduction of UN peacekeepers to the occupied territory of Donbass, however, these forces should only be on the boundary line.