Poroshenko is scheduled to meet with trump next week – media 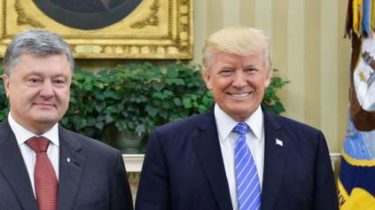 The President of Ukraine Petro Poroshenko plans to meet with U.S. President Donald trump next week.

About it reports RBC–Ukraine with reference to sources in the presidential Administration of Ukraine.

The meeting may be held during the visit of the Ukrainian President in new York, where he will take part in session of UN General Assembly.

The meeting between Poroshenko and trump is scheduled for September 21.

We will remind, in June in Washington, the White house held a meeting of Ukrainian President Petro Poroshenko and his us counterpart Donald trump. Politicians met in the oval office. After that, Poroshenko left to journalists. According to him, they discussed the situation in the Donbas. The Ukrainian leader said that the US President advocated the expansion of cooperation between Ukraine and the EU.