Scientist have identified the eyeless, toothy monster that hurricane washed up on the beach in Texas 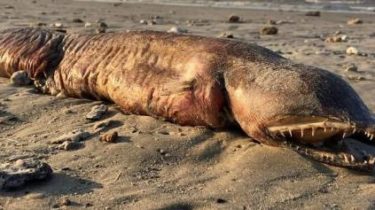 Mysterious eyeless creature with sharp teeth-incisors and tail, which was thrown out of the ocean at one of the Texas beaches after the hurricane “Harvey”, can be saber-toothed eel Aplatophis chauliodus.

To such conclusion came the biologist Kenneth Tay of the National Museum of natural history, Smithsonian institution in the United States, writes The Guardian.

According to him, the lack of a tail made it difficult to accurately identify the creature, but it can be one of two possible types of acne.

Saber-toothed eel less than a meter in length, and it usually hides in holes in the ocean at depths of 30-90 meters. Fish could leave their original habitat due to severe weather.

The biologist believes that the creature on the Texas beach no eyes due to the fact that they have time to decompose during the stay of the corpse in the water.

In the Philippines, after the earthquake, on the shore threw an unknown creature

Recall the mysterious sea creature with sharp teeth-incisors, tail and no eyes thrown out of the abyss at one of the Texas beaches after the hurricane “Harvey”. Being found Preeti Desai, who posted pictures of dead creatures on Twitter to find out what it is.

Most biologists agreed that it must be some sort of fish, for example, a special type of acne. Several experts were in favour of scaly snake-eel, which is found in the Gulf of Mexico. In addition to sharp teeth, the dead animal was a large cylindrical body.