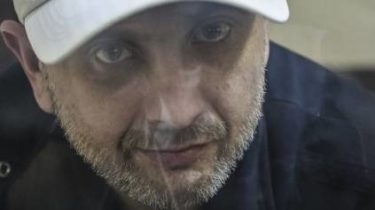 The accused in the “Crimean saboteur” Andrew Sahaja put in a punishment cell.

This was reported by his wife Oksana, reports “Crimea.Realities”.

According to her, Sahaja sent to the brig for two days for “violating the regime of stay in jail”.

“He was imprisoned for violation of the regime: he is not told, it is not up to the wall. The other day he brought a message that put on two days in the brig, he signed and on the evening of 16 September he was taken away,” – said Oksana Sahta.

According to the wife “Crimean saboteur”, the final verdict Zahau will make at the end of October – early November.

Recall, 10 August 2016 of the Federal security service of the Russian Federation said about prevention in the occupied Crimea, acts of terrorism, which was allegedly prepared by the Main intelligence Department of the Ministry of defense of Ukraine. Also, the FSB told about the elimination of “intelligence network” of the Ukrainian intelligence in the Crimea among citizens of Ukraine and Russia.