Who in Europe supports and against the entry of Ukraine into the EU and NATO. Social research 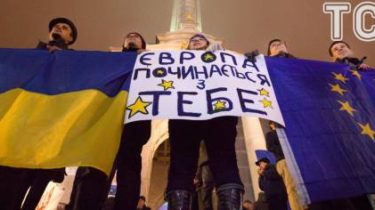 Such data of sociological research company Kantar Public on the order of “Yalta European strategy”.

A survey conducted in seven EU countries – Germany, France, Italy, Lithuania, the UK, Poland and the Netherlands – is representative for each country sociological sample (more than a thousand people per country).

12 years ago, during the first of the same questionnaires, the picture was different: that Ukraine was an EU member, were the majority – 55% – of Europeans surveyed.

Today, the greatest support for the idea of Ukraine’s accession to the EU, in Lithuania and Poland (68% and 67%, respectively), and lowest in the Netherlands (27%). The level of support from France, Germany and the UK – less than half of the respondents.

Those who oppose Ukraine’s accession to the EU, argue that different reasons. A third of respondents believe that the European Union at the current stage of its development cannot afford further expansion. And as many (31%) believe that the adoption of Ukraine will provoke economic problems in the EU.

40% of those who support Ukraine’s accession, I think the main argument that Ukraine is part of Europe. While 34% of supporters of accession to emphasize that this step will help strengthen democracy in Ukraine.

With regard to Ukraine’s accession to NATO, the picture is different. In almost every country where the study was conducted, the majority was in favor to accept Ukraine as a member of the Alliance. Even in France and the Netherlands is 49%, in other countries the level of support more. In Lithuania and Poland it reaches 72% and 76%, respectively. These two countries of the former “Communist camp” provide the most powerful support of Ukraine’s accession to NATO.

The main argument in favor of Ukraine’s integration into NATO Europeans consider her confrontation with Russia (40% of those who support the accession). In addition, 28% believe that Ukraine’s accession to NATO to strengthen Europe’s ability to resist Russian aggression.