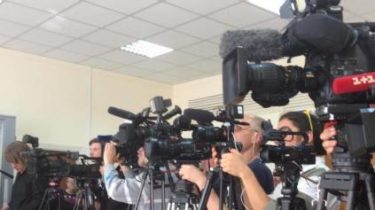 The Dnipro court of Kyiv began the consideration of the case of the Minister of internal Affairs of Ukraine Arsen Avakov against the ex-President of Georgia Mikheil Saakashvili on the protection of honor, dignity and business reputation.

As the correspondent of TSN from a courtroom Minister demanding refutation of the phrase “Avakov possesses the foreign nationality”, which Saakashvili announced on air of the TV channel ZIK.

The defendant in this case is not only the former President of Georgia and representatives of the TV channel and leading ZIKа Tatiana Danilenko. After all, as the representative of the Ministry of interior in court, their claim – a refutation of the phrase in the broadcast of this channel, material compensation Avakov is not required.

The lawyer of TV channel ZIK Lydia Dmitrys said he believes the lawsuit is absurd. As the transfer with Saakashvili went live, but for the remarks of speakers, the channel can not answer. Therefore, the representatives of the media require to refuse the claim in full.

The hearing began with a nearly hour delay in the presence of a large number of journalists. But it was postponed on 21 November, as leading, which is one of the defendants, appeared in court.

The lawyer Saakashvili Dmitry Saltuk said that this is not the first case on protection of honor, dignity and business reputation from the Minister to his client. There are two more cases. One of which was considered in the winter and decided in favor of the interior Minister, but the party Saakashvili’s appeal, which is still pending.

In addition, claims on protection of honor against Saakashvili was filed by the people’s deputies Sergei Pashinsky and Andriy Ivanchuk, Chairman of the SFS Roman Nasirov and Deputy Director of the SCR Nicholas Surikov. All of these cases are in the courts and until decisions on them are not.

We will remind, today in Lviv, the court considered the case on Saakashvili crossing the Ukrainian border. The politician promised to personally come to the meeting.

VideosD over Saakashvili. Mostiska of Lviv regional court will consider the case of illegal border crossing