In Kazakhstan, the young man taught himself the Ukrainian language and dreams of Kiev and borscht 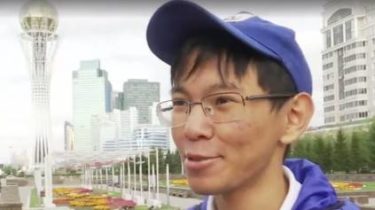 17-year-old Nazar Isaev from Kazakhstan in two years has mastered an unfamiliar Ukrainian language television. He regularly watched programs on the channel “1+1”, according to a story TSN.19:30.

The guy lives in Astana and had never been to Ukraine, nor has ethnic roots – he was an ordinary Kazakh. However, really enjoys the donated book in the Ukrainian language and knows all the stars of the Ukrainian TV. “I have all of the leading know,” he admits and adds that most of all he likes Alla Mazur.

Videoreklama viewing “1+1”, an ethnic Kazakh taught himself the Ukrainian language

Nazar is now a freshman at a chemist. The passion of the son the parents were surprised but did not resist. “He’s a smart guy. If it pleases him, please,” says mom. And the father even remembered some of the Ukrainian songs he heard during his service in the Soviet army.

Nazar even spreads knowledge of some Ukrainian words among friends and classmates. Most difficult, he admits, was to learn the dialects and accents – especially where they differ from the Russian. Now the guy wants to see the country the language of which he was so immensely. “Lviv, Odessa, Kiev, I know a lot about Kiev, but I’ve never been there. I know that in the big beautiful Chernivtsi University. I also want to try Ukrainian dish, a real Ukrainian dish. Every day I eat soup, but I’ve never tried real Ukrainian borsch”, – he said. The mastery of Ukrainian Nazar spent less than two years and childishly surprised those who constantly live in Ukraine and not only says and sometimes does not understand Ukrainian. He says to learn any language, no need to have a reason – only desire.