Saakashvili declares stock of cash on Bank for bribing MPs 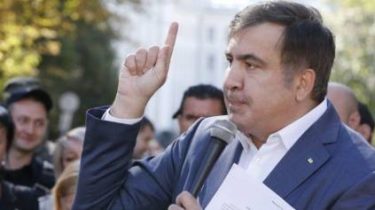 The leader of the “Movement of new forces,” Mikheil Saakashvili said that on the first floor of the presidential Administration allegedly is a warehouse of cash.

He said this at a briefing on Bankova street in Kyiv, reports Ukrainian Pravda.

No desire for another revolution: Saakashvili is convinced that the rally in Kyiv will be peaceful

“They got a warehouse on the ground floor. A warehouse full of cash. Keep the money for the bribery of deputies”, – the politician said.

The former head of the Odessa regional state administration noted that he has no personal conflict with Petro Poroshenko.

“I have no personal conflict with Poroshenko. Poroshenko is only part of the system, but the main problem with him and the oligarchs that are killing the country”, – Saakashvili said.