Hrytsak told how terrorists and the Russian military fighting in Donbas 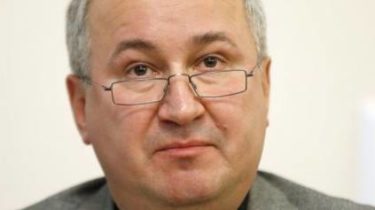 The Chairman of the security Service of Ukraine Vasily Gritsak has told that more than thirty-six thousand of terrorists and Russian soldiers fighting in the Donbas.

He said this during a speech in new York at the anniversary meeting on the 50th anniversary of the world Congress of Ukrainians, the press service of the SBU.

He also noted that for the fourth year, the war continues in Ukraine – “bloody, brutal, without rules and borders.”

“Still hard to believe that in these days, more than thirty-six thousand of terrorists and Russian soldiers continue beschinstvovali our Donbass. Today our common task is to protect Ukraine from the aggressor, which is not only destabilizie the situation in our country, but also sows the seed of false propaganda abroad”, – stated in the message.

In addition, the head of the secret service urged the international community to continue to assist Ukraine in overcoming the Russian aggression, ensuring peace and stability in Ukraine and beyond its borders.

“World Congress of Ukrainians – organization of thousands of Patriotic hearts that beat together for the sake of Ukraine, regardless of time and distance,” ‒ said the head of the SBU.

We will remind, earlier the speaker of the General staff of the Armed forces of Ukraine Vladislav Seleznev said that the Russian military personnel do not stop to arrive in the occupied territories of Eastern Ukraine, including the management team.