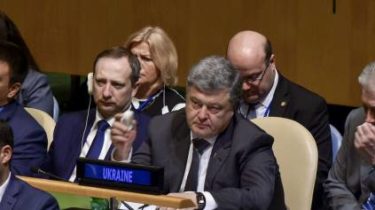 The President of Ukraine Petro Poroshenko September 20, speaks during a meeting of the UN security Council on September 20.

See the online broadcast of the speech by Ukrainian guarantor on the website of TSN.ia.

Recall, September 20 in new York city launched the UN General Assembly. It was assumed that the Ukrainian guarantor Petro Poroshenko will speak at the security Council meeting to talk about the peacekeepers in the Donbas. And tomorrow, 21 September, on the sidelines of the Assembly, he will meet with us the head of Donald trump. The US President has made a speech at the General Assembly. He talked about Ukraine and noted the importance of protecting the sovereignty of States.