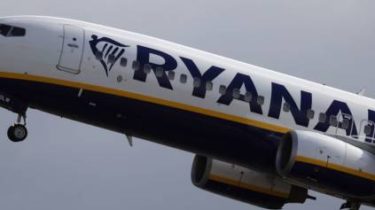 Ryanair has published information on what flights cancelled during the period from 15 September to 28 October.

According to Executive Director Michael O’leary, customers whose flights were cancelled will receive an email, writes the BBC. So, the budget airline will cancel 40-50 flights daily for the next six weeks, once admitted that “ruined” the planning of vacations for pilots.

The Executive Director also said that most people will be transferred to an alternative Ryanair flight the same day. In particular, if you do not succeed, then people will transfer to flights on other days, also, the airline will fulfill its promise of compensation. Details of all of canceled flights is available on the website of Ryanair.

It is noted that more than 200 flights were cancelled going in or out of London Stansted airport, and a small number in Edinburgh, Manchester and Birmingham. The airline said that it cancels flights at airports where there are active routes, so it will be easier to accommodate passengers on other flights.

Also the airports of Rome, Milan and Barcelona will also see a significant number of canceled flights. O’leary reported that about 400 thousand passengers directly feel cancellations. From November 1, having to cancel flights will not.

We will remind, earlier it was reported that on 15 September the low-cost airline Ryanair will be 40-50 flights daily. According to the low-cost carrier, a decision was taken to improve the punctuality of the company. In the first two weeks of September, the level of punctuality of flights Ryanair has dropped below 80% due to delays, weather conditions, strikes and vacations of the pilots or crew members.