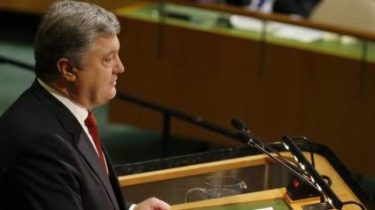 The President of Ukraine Petro Poroshenko appealed to the member countries of the UN initiative to create a group of Ukrainian friends in Crimea.

He said this during a speech at the meeting of the General Assembly of the Organization, writes UKRINFORM.

“The time has come to create an international group of friends of Ukrainian Crimea to coordinate our joint steps and actions. We look forward to a coordinated and dedicated support of our international partners,” – said the President of Ukraine.

He expressed hope that international support for the initiatives of Ukraine regarding the enforcement of human rights in the temporarily occupied Crimea, in particular the following relevant resolution of the UNGA”. He stressed the need to strengthen the international regime of de-occupation of Crimea. Read also: the President has invited to Ukraine assessment mission of the UN on the issue of peacekeepers Ukrainians and Crimean Tatars are arrested even for the publication in social networks, or for hanging a Ukrainian national flag at a private home. Continuing persecution of leaders of the Majlis, whose activity is prohibited in the Russian occupation authorities gave examples of the President. “The fact that at the highest international level of the UN General Assembly – Russia recognized as the occupying power proves that we are on the right track,” he said. However, he continued, Russia unceremoniously violates this resolution and further ignored all calls for the office of the high Commissioner for human rights to ensure access to Crimea of an international monitoring mission on human rights.

The aggression of the Russian Federation and calls for the introduction of peacekeepers. The full text of Poroshenko’s speech, the UN security Council

“The international community must closely monitor the situation in Crimea to prevent a new genocide against the Crimean Tatars and Ukrainians, inspired by the modern advocates of the Stalinist totalitarian ideology,” – said Petro Poroshenko.

He also drew the UN’s attention on the militarization of Crimea, calling it a challenge in the field of security, which affects all of southern and Eastern Europe, North Africa and the middle East.

Recall, September 20 in new York city launched the UN General Assembly. On 21 September, on the sidelines of the Assembly, the President of Ukraine will meet with the American leader Donald trump. The US President has made a speech at the General Assembly. He talked about Ukraine and noted the importance of protecting the sovereignty of States.