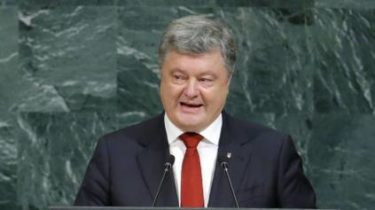 The President of Ukraine Petro Poroshenko urged the UN to support the idea of sending UN peacekeeping mission in the Ukrainian Donbass, and stressed on the need of compulsory attendance throughout the occupied territory.

With the corresponding statement he made at a plenary meeting of the UN General Assembly.

“We will welcome any suggestion that will bring peace to our country. We are convinced that a full-fledged peacekeeping operation, the UN is the only effective solution to de-escalate, protect the people of Ukraine and for approaching us to a political settlement,” – said the President.

“The mandate of the peacekeepers to cover the entire occupied territory of Ukraine, including the Ukrainian-Russian state border, and it is obligatory”, – the President emphasized.

“While the border is being used by Russia as a key way for the supply of arms and personnel to the Donbas, until then there will be no peace in my country”” – says Poroshenko.

The Ukrainian head of state stressed the impartiality of the peacekeepers.

“If we are able to bring peace in the heart of Europe – for this to determine the correct parameters”, – said the head Ukrainian state. In his opinion, a full-fledged international presence may also help to cope with the increasing terrorist activities in the territories affected by the conflict.

Recall, September 20 in new York city launched the UN General Assembly. On 21 September, on the sidelines of the Assembly, the President of Ukraine will meet with the American leader Donald trump. The US President has made a speech at the General Assembly. He talked about Ukraine and noted the importance of protecting the sovereignty of States.