Where agree of the world. What Poroshenko will say, tribute UN and when to meet with trump 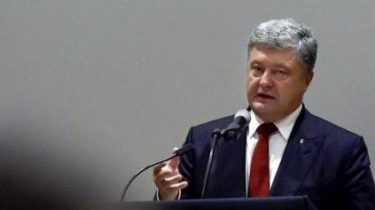 Today, 20 September, in the evening Kyiv time from the podium will be Petro Poroshenko. The President of Ukraine, probably, will speak about the peacekeeping mission in the Donbas. And tomorrow, Thursday, on the sidelines of the Assembly, he will meet with U.S. President Donald trump. This will be their second meeting this year.

Trump, incidentally, has already made a speech at the UN General Assembly. He remembered and Ukraine and stressed the importance of protecting the sovereignty of States.

“Ukraine abandoned the third largest nuclear potential, having received security guarantees from the countries of the Budapest Memorandum. But now we have to prove that the system of non-proliferation of nuclear weapons would have to work. Otherwise, every year there will be the new North Korea. That is why it is so important transatlantic unity and solidarity of the world with Ukraine,” – said Poroshenko.

Earlier the President of Ukraine announced that initiated the negotiations on the UN peacekeeping mission in the Donbas.