“In the Crimea betrayed the Ukraine is judged not to betray”: the dead made a strong speech in court 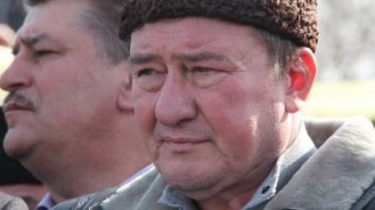 One of the leaders of the Crimean Tatars, the Deputy head of the Mejlis, Ilmi Umerov, who occupied the Crimea on trial for incitement to overthrow the political system in Russia, gave a strong emotional speech during his last words in court.

“I do not consider myself guilty before Russia, in whatever it is! She is guilty in front of me! She committed an act of aggression against Ukraine, occupied and annexed my Homeland, Crimea!”, – began his speech the dead.

Deputy head of Mejlis said that he is on trial for his political views, but he still does not recognize the occupation of Crimea by Russia. According to Umerov, the Peninsula can return to the Ukraine, but not in a violent way.

“Not recognizing the jurisdiction of Russia in the Crimea, I think it is possible the return of the Crimea only non-violent way, I think that the effective strengthening of economic sanctions would lead to the fact that Russia itself would take a decision on the return of the Crimea under jurisdiction of Ukraine”, – said the dead, adding that its position coincides with the position of the entire civilized world.

The defendant called the annexation of Crimea in 2014 aggression on the part of Russia and noted that the Crimean Tatars at that period showed their civic position commitment to the integrity of Ukraine and is still, overwhelmingly, it does not change.

“It is because of this position of the Crimean Tatar people was under the steamroller of repression de facto established in the Crimea, the Russian occupation authorities,” said umer.

With regard to the criminal proceedings against him, the Deputy head of the Mejlis noted that “demonized FSB actually was not even a year how to fabricate a criminal case against three volumes of”, so his suit is only an acquittal.

“Today in the Crimea betrayed the Ukraine is judged not betrayed! Judged traitors patriots! The struggle continues, regardless of the content of a sentence!”, said Ilmi umer.

According to him, the Crimean Tatars who now defends the security of the entire civilized world.

“If the aggression of Russia towards Ukraine and Crimea go unpunished, it will set a precedent, which will eventually collapse the entire world order,” he said.

Umer finished his speech with the words of the Crimean Tatar national anthem: “I swore I gave the word for his people to die…”. He added: “see you in the Hague!”.

We will remind, the Russian occupation authorities in Crimea accused Umerov extremism. To such conclusion the FSB came from the statement of the Deputy Chairman of the Majlis of the channel ATR. In addition, it was reported that by decision of the Russian occupation authorities in Crimea the activities of the Mejlis of the Crimean Tatar people is forbidden, and for every fees Majlis will open criminal proceedings.

At the hearing on 20 September, the Russian prosecution has asked for Umerov 3.5 years of conditional imprisonment with the prohibition to engage in public and teaching for a period of three years. The sentence Ilmi Umerov bear on September 27.