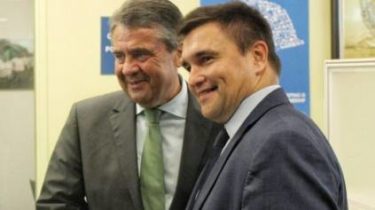 Foreign Minister of Germany, Sigmar Gabriel, called for the activities of the UN peacekeeping mission in the entire territory of the occupied Donbas.

He said this during a meeting with foreign Minister of Ukraine Pavlo Klimkin on the sidelines of the 72nd session of the UN General Assembly, reports the press service of the Ukrainian foreign Ministry.

“Gabriel stressed that the mandate of such an operation should not be limited to protection of members of the Special monitoring mission of the OSCE and should include the entire occupied territory of Donbass”, – stated in the message.

During the meeting, in addition to the peacekeeping mission, the Ministers discussed issues to mobilize collaborative efforts to settle the Russian-Ukrainian conflict and enforcement by Russia of the Minsk agreements.

We will remind, the President of the Russian Federation Vladimir Putin has declared, that supports introduction of UN peacekeepers to the occupied territory of Donbass, however, these forces should only be on the boundary line.