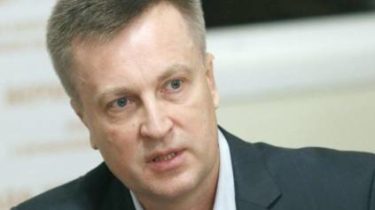 In the SBU announced the cause of the call for questioning of the former head of this force on Valentin Nalyvaychenko.

The main investigation Department of the security Service is investigating the case on the grounds of criminal offenses under part 2 St. 332 criminal code of Ukraine (Illegal transportation of persons through the state border of Ukraine by previous concert group of persons). Security forces investigated the facts support Sbushniki former senior officials and heads of law enforcement agencies in illegal crossings of the state border of Ukraine during 2014 and 2015.

Tymoshenko has decided to team up with.

It was found that SBU helped to illegally cross the border of Ukraine, one of the former leaders of the SBU.

“In this production, in particular, found that in 2014-2015, the employees of SB of Ukraine organized the illegal crossing of the state border of Ukraine, one of the former heads of security service of Ukraine, which, together with the leader of the NGO “Ukrainian choice” Viktor Medvedchuk has made several missions to the Russian Federation without passing border and customs control”, – stated in the message.

A Citizen Of Ukraine. Nalyvaychenko questioned by #SBU Main investigation Department of the security Service of Ukraine investigates…

Published by the security Service of Ukraine on September 21, 2017

It is reported that on this fact one of employees of security service of Ukraine handed a notification of suspicion.

The SBU stressed that Nalyvaychenko was interrogated as a witness concerning circumstances known to him the Commission of the above criminal offense.

Earlier it was reported that the leader of “Justice” and former head of the SBU Valentin Nalyvaychenko called on interrogation in security Service of Ukraine. Himself Nalyvaychenko called the challenge “instigated and fabricated” and added that it has evidence of ties with FSB leaders around the President and the SBU.