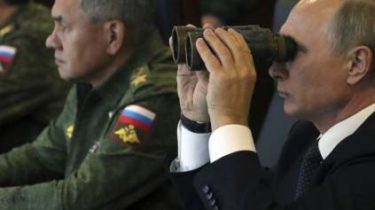 Russia is at the final stage of the Russian-Belarusian exercises “West-2017” worked out a drawing of a massive nuclear strike.

This is stated in the comments of the Secretary of the national security Council and defense Oleksandr Turchynov.

According to him, September 20, the Russian Federation completed the active phase of the exercises “West-2017”. The last stage was worked out applying the conditional massive nuclear missile attack with the involvement of forces and means of all three components of the nuclear triad.

In addition, the NSDC Secretary said that during the last day of the exercise to practice nuclear missile strike involved six long-range aviation aircraft Tu-95MS and Tu-22M3. They carried out flights in the airspace of the Barents, Baltic and Norwegian seas.

“Rocket forces of strategic purpose were presented to the combat crew of 14 rocket division, which carried out combat training launch of an Intercontinental ballistic missile RS-24 YARS from the Plesetsk cosmodrome (Arkhangelsk oblast) goals at the site “Kura” (Kamchatka Peninsula). Rocket underwater cruiser of strategic appointment “Dmitry Donskoy” of the Russian Northern fleet generated by the electronic launch of an Intercontinental ballistic missile of sea basing” – said Turchinov.

By the way, the Minister of defence of Poland Anthony Macierewicz said that the Russian-Belarusian exercises “West-2017” will be continued after the 20th of September, and the Russians can be worked out the use of nuclear weapons.

The most important of the controversial Russian-Belarusian military exercises, see the link.