Strategic partnership: Poroshenko and Erdogan met on the sidelines of the UN General Assembly 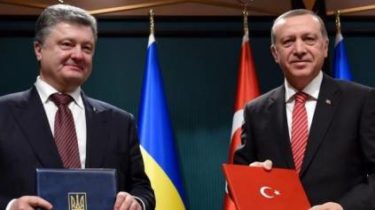 The President of Ukraine Petro Poroshenko held a meeting with Turkish President Recep Tayyip Erdogan in the framework of participation in the 72nd session of the UN General Assembly.

Recep Tayyip Erdogan reiterated Turkey’s support of sovereignty and territorial integrity of Ukraine within its internationally recognized borders. The two heads of state discussed preparations for the sixth meeting of the strategic Council of high level between Ukraine and Turkey to be held in Kiev.

“Petro Poroshenko and Prime Minister of Turkey Recep Tayyip Erdogan expressed his satisfaction with the substantial progress in some strategic areas of cooperation and expressed readiness to make further efforts to deepen the strategic partnership between the two countries in the practical plane”, – stated in the message.

Peacekeepers and the Minsk agreement: what Poroshenko with Macron said on the sidelines

The President of Ukraine has condemned the faction leaders of the Majlis of the Crimean Tatar people, in particular Akhtem chigusa and Ilmi Umerov.