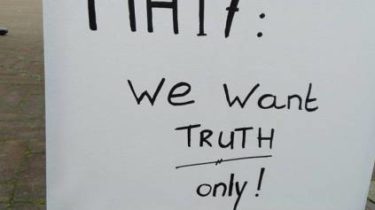 The President of Ukraine Petro Poroshenko during a speech at the session of the UN General Assembly declared that the Downing of Malaysian airlines flight MH17 with 298 people on Board lies on the conscience of Russia.

Poroshenko reminded that now is under investigation of the tragedy – the technical and criminal. Both revealed specific details.

“Those who were behind this heinous crime came from Russia. The missile was delivered from Russia. The death of the victims of flight MH17 on the conscience of Russia”, – said the President.

Poroshenko also noted that the five countries included in the Joint investigation team, decided to bring to justice those responsible for Downing the plane in the framework of the Dutch legal system.

In addition, this year the international Court of justice began hearings in the case of Ukraine against Russia for violating the International Convention for the suppression of the financing of terrorism.

Three years of impunity. For the 298 deaths on Board MH17 no one answered, but new evidence

“We hope that the decision of the high court, the UN will help to attract Russian Federation responsible for numerous violations of international law and the financing of crimes committed in 2014”, – said the head Ukrainian state.