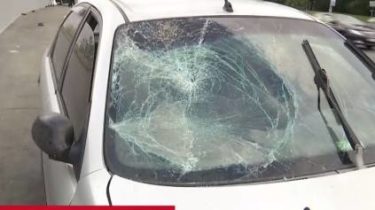 A day of rain in Kyiv has increased the number of accidents on the roads. Using dozens of accidents city stopped in a huge traffic jams, according to a story TSN.19:30.

The problem is str. The important route along the Dnieper stopped after a strange accident: “a car” at speed hooked the chipper, the machine whirled and threw it across three lanes on a Mercedes, and then on the sidewalk, the car hit a pedestrian. The victims are in the hospital, the driver of “Lanos” lucky to get away by the fright. “The rain, the accident,” he explains and says he does not remember their speed and the collision is not guilty because the car was out of control.

Videofilmy rain in Kiev has caused traffic jam in the city

Another strange accident occurred in the center of the capital, where the shattered expensive sports car. Police tentatively inclined to think that the driver overestimated the capabilities of his car with the engine capacity of 6.3 liters – were able to quickly disperse, but in turn is not fit. “The majority claims that “Mercedes” was a little hasty. He is in Tokyo drift went in there,” says police spokesman Vladislav Monday.

Despite the fact that on roads of Kiev from-for a rain it was really slippery, the police do not think to blame for the accident weather a much greater responsibility drivers have with their flaws. “Arrogance and carelessness”, – he calls them a police spokesman.