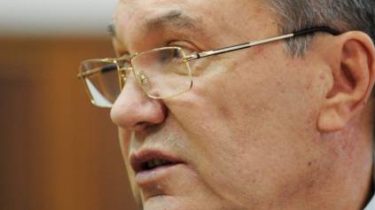 Anti-corruption organization Transparency International in Ukraine appealed to the District administrative court of Kyiv with the claim against the Prosecutor General, Military Prosecutor’s office of the ATO forces and the state enterprise “Information judicial systems” to cancel the decision on the classification of the court verdict, according to which confiscated $ 1.5 billion of funds, “the criminal organization of Yanukovych”.

The confiscated money Yanukovich has still not received the NBU

The organization, in its statement requires to disclose the sentence of the court.

“It’s been almost six months since the Prosecutor General’s office arrested $ 1.5 billion of the funds of the former regime. The judgment on which the funds were arrested and are still not published. Transparency International Ukraine believes it is very disturbing because firstly, society still does not know, at whom, for what crimes, and exactly how much money was confiscated, and secondly, if a solution contains the technical imperfections, it will be appealed,” said Transparency International.

The organization added that the state enterprise “Information court systems” refuses to publish the court decision in the open Unified registry of court decisions referring to the prohibition of the prosecution. The Prosecutor General’s office said that found this decision to be a state secret.

We will remind, on April 28 the court’s decision on the confiscation of 40 billion UAH ($1.5 billion)which belonged to the fugitive Viktor Yanukovych, came into effect. President of Ukraine Petro Poroshenko said that these funds will be spent on Ukrainian army and help vulnerable people.

Videopokeria asking for Yanukovych to prison for life