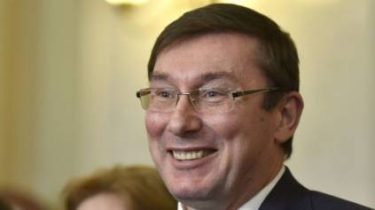 Prosecutor General Yury Lutsenko commented on her son’s wedding, which was celebrated in the elite country club Queen Country Club near Kiev.

Under the head of the GPU on the exposure to the bribery of two judges from the Dnepr user Sergey Malchuk posted the video with the investigation of journalists “Schemes” on the occasion of the wedding of the son of Prosecutor General. Reporters noted that the official car of the General Prosecutor’s office allegedly drove the makeup artist of the bride. Also in the video said that the car could used for transportation of the gifts to the newlyweds.

In response, Lutsenko asked the author of the comment that is not liked man in his family holiday.

“And you, Sergey, I do not like? My son, having won under the WCT, is not entitled to the wedding? Or I have no right to come to the party your friends? Returning the country 50 billion, I’m entitled to a little 5 hour happiness”, – he wrote.

Smallcock, in response noted that it is more interested in the behavior of employees of UGO who used force against journalists under the restaurant.

“You will agree – whatever the motives of the shooting were not journalists – you are a person not just a public and civil servant of the highest rank. So we have to understand that you attention, like anyone else,” he said.

But Lutsenko wrote that workers HUGO were outside of the restaurant, and therefore their actions should be judged by heads of State.

We will remind, on the night of September 16 in Koncha-Zaspa near one of the restaurants, which celebrated the wedding of the son of Lutsenko was Ukraine’s President Petro Poroshenko, Prime Minister Vladimir Groisman, Vice-speaker Irina Gerashchenko and a number of politicians. Journalist Mykhailo Tkach announced that he and the operator were attacked by employees of the state security Department attempting to stop the shooting.

In HUGO began an internal investigation of the actions of the employees, and the head of the State guard Valeriy geletey said that his subordinate did not attack journalists, and perezapisi using the slope and grabbed the operator.

Videosvery boom: people’s Deputy Serhiy Leshchenko and son Yuriy Lutsenko got married with their loved ones this weekend