On the controversial Shtepa wearing an electronic bracelet 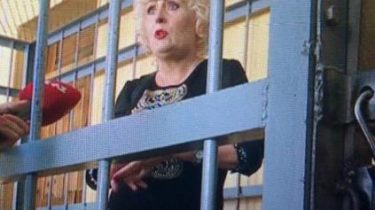 Law enforcement officers wearing an electronic bracelet tracking on the former head of the city of Slavyansk of Donetsk region Nelyu Shtepa.

This was announced by the Minister of internal Affairs of the Zoryan Shkiriak in Facebook.

She needs to be behind bars! This is the face of a traitor! This person called Putin and brought the war to Ukraine! Besne…

Published by the Zoryan Shkiryak 21 Sep 2017

“…Nelyu Shtepa wearing an electronic bracelet. It will be under hour house arrest with electronic means of control”, – he wrote on the social network.

Videonale Shtepa lives in the house of a friend in Slavyansk, guarded round the clock

Dancing the hopak, can not be quiet. As for the Network comment on release Shtepa

We will remind, Nelly Stepu accused of encroachment on Ukraine’s territorial integrity and the creation of a terrorist organization. Investigators insist that in 2014 Shtepa urged residents Slavyansk to support the separatists and Russian invaders. And today it was reported that Nelya Shtepa at the time refused to go on exchange to militants. This was reported by Vice-speaker Irina Gerashchenko. The former head of the Slovyansk militants have made in the so-called lists of the dismissal. But Shtepa flatly refused such an exchange. Today, the defendant said the exchange did not go – because he wants to prove his innocence.