In the Donbass region of Syria, threw the group of special troops of FSB of the Russian Federation under the name of “Grad” – Tymchuk 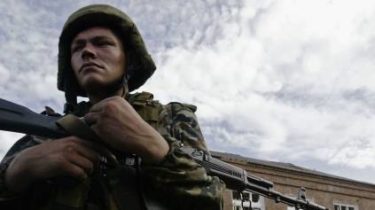 In the occupied Donbass of Syria, threw the group of special troops of FSB of Russia.

This is stated in the report of the coordinator of group “Information resistance” Dmitry Timchuk in Facebook.

The settlement of sedovo, Donetsk region since the beginning of September is a group of special troops of FSB of the Russian Federation with the title “Grad”.

The militants, who belong to the group, were in the territory of the new Azov area in 2014 and participated in his capture and the battles with the regiment of National guard of Ukraine “Azov”.

Subsequently, the special forces deployed to Syria, where until recently, he performed the task in the part of the Russian contingent was then again transferred to the Donbass. To support the group gave the armored group, consisting of five armored combat vehicles (from the unit “1-St of AK DNR” of the Donetsk region).

In the text of the joint statement of the three countries announced the establishment of the following “areas of de-escalation” in Eastern ghouta near Damascus, in the Northern province of HOMS in the Central part of the country, in the province of Idlib and in parts of the neighboring provinces of Latakia, Hama and Aleppo, as well as in certain areas in the South of Syria. We will remind, in may of this year, Russia, Turkey and Iran approved a plan to create four “zones of de-escalation” in Syria and “security strips”.

Since that time, have earned three of the four “zones of de-escalation” – all except area in Idlib province. “Zones of de-escalation” are created for a period of six months “to ensure the observance of the cease of hostilities, the territorial integrity of the Syrian Arab Republic and to continue the fight against terrorism,” the statement reads.