Beat from grenade launchers and machine guns. For the past day militants almost 30 times violated the truce 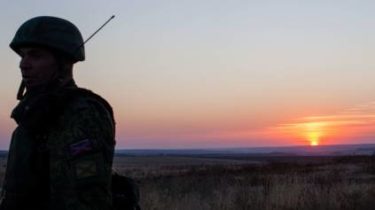 For the past day Pro-Russian fighters 27 times violated the truce in the Donbas.

APU had 19 times harshly answered the enemy with weapons not prohibited by peace agreements.

As a result of combat action one Ukrainian soldier was injured.

As reported in the headquarters, in the end of the last days, the situation remained tense, however, fully controlled by the ATO.

After 18 hours, the enemy continued shelling Ukrainian positions at the seaside and Donetsk areas.

In the Donbass region of Syria, threw the group of special troops of FSB of the Russian Federation under the name of “Grad” – Tymchuk

Evening and night fighters three times beat from various types of grenade launchers, heavy machine guns and small arms in the area of Avdeyevka and the industrial zone of Kamenka. The same gun twice Russian mercenaries opened fire in the vicinity of Zaytsevy and Nevel. Also under fire of the enemy came Ukrainian strongholds near the mine Butovka and Sands.

On the seaside direction, the occupants used automatic grenade launchers in the Water, and machine guns – near Gotovogo. In addition, under machine-gun fire fighters were strengthening the forces of ATO on the outskirts of Talakovka and Pavlopol.

#Topod the Construction of the press center of staff ATO in 22.09.2017. At the end of the last days the situation in the ATO area …

We will remind that earlier the OSCE said about nearly two thousand violations of the ceasefire regime in the Donbas over the past week. The epicenter of the violence was the triangle Avdeevka-Yasinovataya-Donetsk airport. In this district there were 40% of the total number of violations of the cease-fire last week. Areas to the East and North-East of Mariupol occurred in approximately 30% of all violations mode “silence”.