The electronic bracelet. picked up the dress and plans to decorate it with rhinestones 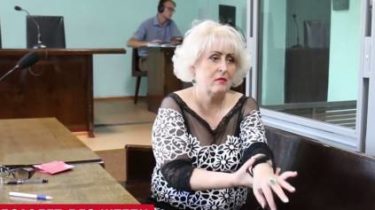 The controversial ex-mayor of Slavyansk Nelia Shtepa arrived in Kharkiv on the next hearing on her case is already with an electronic bracelet on his arm. She came without an escort of police and without a support group, but with three lawyers, says the story TSN.19:30.

To the black bracelet. wearing black and white dress and promised to decorate their means of control crystals. At the meeting she took drugs and had a bad cough. The trial lasted a half hour and questioned defense witnesses in a case of encroachment on the territorial integrity of Ukraine and the creation of a terrorist organization. Unhappy after the recent events in Kharkiv, the activists attempted to ask why the suspect changed the measure of restraint.

However, the judges went with the promise to comment on Monday, but … he’s lawyered up and ran from the hall, in which interested members of the public and journalists. Now to follow its movement will be with the bracelet in the police Slavyansk. Prosecutors hope to remove electronic accessory Shtepa will not. “I hope he will stick to the rules. We insisted on extending the measure of restraint in form of detention, but at the moment we do not see full text of the decision than the court motivated this decision”, – said the representative of the Prosecutor’s office of Kharkiv region Olena Kravchenko.

The main intrigue in the offensive Shtepa: the court will explain why she was released from custody

As previously reported, the controversial ex-mayor of Slavyansk Shtepa is in a small house in the city under constant guard. The locals on the return Shtepa know many people from this happy and even supports the former head of the city, which is on trial for separatism. “And our state is absolutely not protected from the separatists,” they say. She Shtepa says he wants to prove his innocence, moreover, plans to run for mayor and even the President.