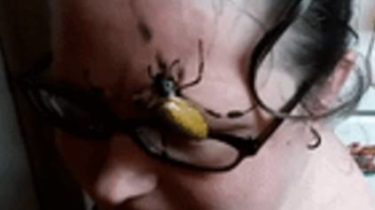 In the U.S. state of Florida woman in her home found a giant spider.

Later she allowed him to climb on his face, writes Mashable. It is noted that the spider found American, have krugoobraznymi Nephilim. This spider also known as banana.

In turn, while the spider examined the face of the hostess, she behaved rather coolly, as evidenced by videos posted on YouTube.

By the way, body size (without legs) this species of spiders ranges from 1 to 4 cm and the leg span up to 12 cm

Earlier, a huge spider-hunter the size of a dinner plate incredibly frightened a few in the Australian Queensland, suddenly appearing on the glass door of the house.