From the Bridge of lovers is going to jump young man 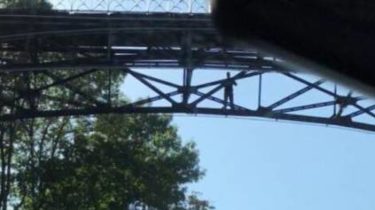 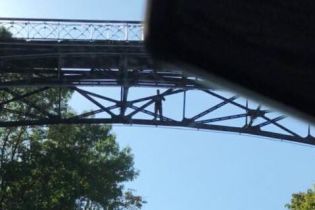 In Kiev, a young man threatens to jump off a Bridge lovers.

It is noted that the guy came down from the bridge on the bottom backup. Sometimes he clings to a support with only one hand.

Police say that this situation lasted for about an hour. One of the officers on the bridge trying to talk to the guy. Now the bridge on duty police cars, ambulances, and firefighters.

Meanwhile, the roadway under the bridge was blocked.

Attention! The movement expensive the Park is temporarily closed. Go around! The reason: the man who climbed down from the bridge and does not want to climb back.

In Kiev the guy hanged himself because of unrequited love

We will remind, in Kiev, in the Shevchenko district in the room of the gallery found the dead body of a 42-year-old man. Law enforcement said the woman. She couldn’t open the door to the gallery, where her husband and did not respond to calls. A preliminary version of the investigators is suicide because of debt or heavy chronic disease.

The investigative Department of Shevchenkovsky police Department initiated criminal proceedings under part 1 St. 115 (Premeditated murder) of the Criminal code of Ukraine with additional qualification – suicide. All versions will be checked in the course of the investigation.