In the Russian Vladivostok Oceanarium coach fired for beating a walrus 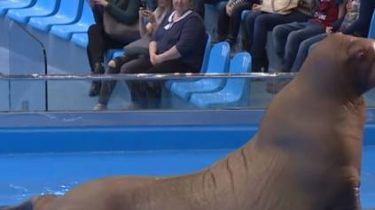 The management of the Primorsky Oceanarium in Vladivostok will fire the coach for inhumane treatment with the walrus Misha.

In Thailand from a blood infection and died a turtle, which got almost a thousand coins

According to the representative of the aquarium Elena Molchanova, the incident occurred on Saturday. After the morning performance, the walrus passed by the pool with seals and tried to communicate with them. Misha is very friendly and inquisitive, but the 800-pound animal could accidentally hurt the seals.

“The situation was a freelance. Trying to solve it, the coach violated professional ethics. Because in the Primorsky Oceanarium practice only positive interventions on the animals reaction to the actions of the trainer extremely hard. Violated the ethical standards of the aquarium, the employee will be dismissed”, – said Molchanov.

Molchanov also said that the coach was sober. She noted that injuries walrus is not received, the animal continues to participate in performances.

Videoproviders of France was forbidden to keep and breed in captivity, dolphins and orcas

We will remind, recently in Florida has died the world’s oldest manatee. The animal got into the Guinness book of records as the manatee, which is the longest lived in captivity.